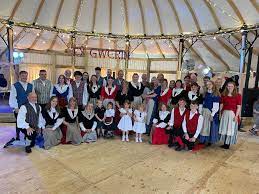 The first meeting of Dawnswyr Talog dance team was held in September 1979, thanks to three visionary people: Eirlys and Mansel Phillips and Eirwen Davies.

Initially, the calendar consisted of local dance ceilidhs (known as a twmpath dawns in Welsh) and occasional exhibitions but, as the team developed, it built its national and international reputation. Today, it is fair to say that Dawnswyr Talog dancers are one of Wales’s most prominent traditional dance groups, and since 1979 they have certainly put the small West Wales village of Talog, close to Carmarthen, on the map!

The dancers and musicians meet at Talog Hall but the influence of Dawnswyr Talog extends far beyond this. Friendships with dance teams throughout Europe, and visits to various folk festivals have given Welsh traditional dance an international platform.

Closer to home, a number of team members teach traditional dance and clogging in various schools and clubs – some former team members have even set up brand new teams. The acorn becomes an oak, so to speak.

As well as promoting Welsh folk dancing, Dawnswyr Talog’s main aim is to entertain and have fun, as this is the best way to ensure that the richness of our dance tradition continues. The group offers  a varied program that includes folk dances from all over Wales; clog dancing; traditional dances and some original dances – something for everyone!