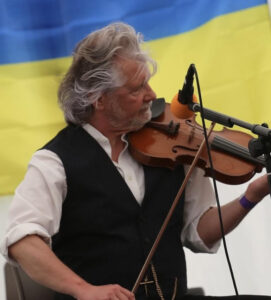 Selyf performs regularly on fiddle with Cat’s Claw and Jac Y Do ceilidh and twmpath bands, both nationally and internationally, as well as accompanying many professional singers of various styles. For over forty years he has been an accompanist with a number of Welsh folk dance companies.
During the last few years he has been employed by the BBC to perform as a folk fiddle player on drama produc>ons such as Poldark, Requiem and Dr Who and a number of feature films. He has appeared and guested on Welsh media programmes, Heno and Noson Lawen and has been employed by recording and television companies as a session musician e.g. Ty Cerdd and ITV light entertainment.
During his extensive career as a professional fiddle player/performer he has appeared and represented Wales at numerous events and festivals within the UK, mainland Europe, the Far East and South America.
Selyf is a regular performer at the National Eisteddfod, on the main stage and also at ‘Ty Gwerin.