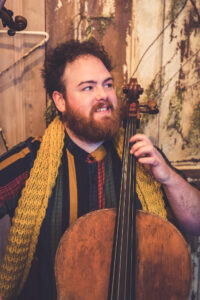 RWCMD graduate Jordan Price Williams has carved a niche for himself as a leading exponent of a new generation of traditional style cellists in Wales. A member of VRï, Pendevig, Elfen and a previous member of NoGood Boyo, Jordan has performed across the world and has received multiple awards and nominations. Jordan is a true multi-instrumentalist; the cello, double bass, whistle, harmonium, piano and the occasional bagpipe all playing a vital role in his career. He is also a singer, performing almost exclusively in the Welsh language.
Photo – @JennieCaldwell26