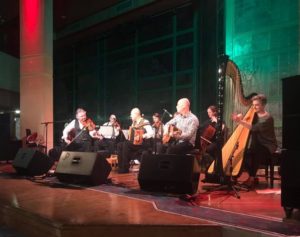 Cat’s Claw “happened” together in January 1993 when a string of old acquaintances had each received an invitation to the same wedding party. When this fact was realised, the idea was mooted to hold a few practices and stage a short ceilidh by way of a wedding present… The dance was a huge success, the scratch musicians (aah… that’s where the name comes from!) were told that their sound worked a treat – and so a new band was born!

Working centre stage, Guy is responsible for the band’s characteristic rhythmic style with an understanding developed through a six-year apprenticeship in various South Wales bands. Selyf and Imogen go on flights of fancy in and around the tune, emphasising Roger’s critical role in pinning the whole thing down with his inventive yet rhythmic bodhran playing. The band calls on a selection of experienced callers who will fit the dances to whatever the audience particularly wants – or are capable of!

Cat’s Claw is fundamentally an all-acoustic band that gets your feet moving and the tunes are those that the band enjoys playing together, whether Welsh, Irish, Scottish, European or American – it’s all lined up and waiting for the Cat’s Claw treatment!