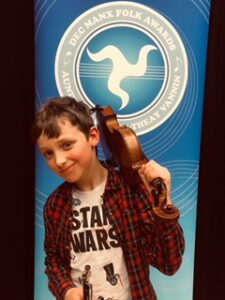 Frank Joughin is a 13-year-old fiddle player originally from south Wales and now
living on the Isle of Man. He has won multiple awards for his playing including
the NAMA award for contribution to Manx culture through music and first place
for solo violin in The Guild Manx Music Festival earlier this year. He was also
runner-up in the Manx talent competition The Next Big Thing in February 2020.
Frank will be performing during the weekend with The Kipperceili Band, lead by
his Granddad Greg Joughin, and the Cwlwm Celtaidd festival band SGÊR.
Back home Frank is a regular member of the youth band Scran, the Manx Youth
Orchestra and the Manx dance team Skeddan Jiarg, with whom he last performed
at Cwlwm Celtaidd in March 2020.
Frank is a fluent speaker of the Manx language having attended the Manx-
medium primary school Bunscoill Ghaelgagh.