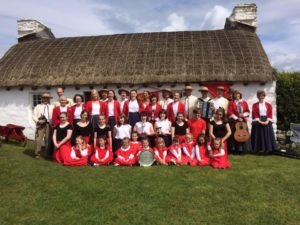 Formed in 1982, Perree Bane is a Manx traditional dance, music and song group based in Castletown, in the South of the Isle of Man. The group has around fifty members of all ages with a strong children’s section who also perform as a group in their own right. The name ‘Perree Bane’ is Manx Gaelic for ‘White Jacket’, which the men wear along with their Loghtan wool trousers. The aim of the group is to keep alive and to some extent extend the repertoire of traditional Manx dances. Perree Bane performs regularly at events around the Isle of Man and also at festivals and competitions further afield, such as Wales, Brittany and Cornwall.