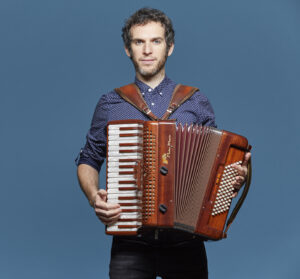 Jamie Smith is one of the UK’s finest accordionists. Born in South Wales, Jamie, aged 39, is best known for his work with the InterCeltic band Jamie Smith’s MABON. The band formed back when Jamie was still a teenager and has performed thousands of shows on several continents: grand outdoor spectaculars in France; folk festivals in the UK; delirious all-comers in Mexico; forest parks in Italy; waterfront shows in Australia and castles in Poland. Mabon has released seven albums, all featuring Jamie’s original compositions, which he has published in a book of his music called Tunesmith. After more than twenty years on the road, Mabon finally signed-off with a farewell tour in the Autumn of 2021.

Through his wife Gráinne, Jamie has strong ties to the Isle of Man and now lives in Peel on the west of the island. He has been playing Manx music for many years and is a former member of the successful trio Barrule, which helped to promote manx music both on and off the island.

Up until Jamie took a step back from fulltime touring in 2020 he was a member of the highly respected Welsh trio ALAW. Jamie recorded two albums with ALAW and toured with the trio for several years, the pinacle of which was a sold out performance for the BBC Proms at tbe Royal Albert Hall in London, accompanied by the BBC Concert Orchestra.