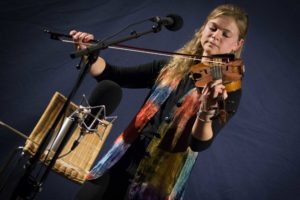 Phoebe Rees is a musician and songwriter from Oswestry. Influenced by a diverse range of musical genres and cultures, she predominantly combines elements of Celtic, English and American Folk traditions into her music-making. Drawing on inspiration from her early years in the Scottish Highlands, experiences as a classical viola player studying in Edinburgh and London, and subsequent travels throughout the rest of the British Isles, Europe, South America, and India; she performs her own compositions along with interpretations of material by other artists close to her heart. Phoebe sings and accompanies herself mostly on the fiddle, viola, and guitar.

In addition to her work as a performing musician, Phoebe is a qualified instrumental teacher and creative music workshop leader with a wide range of teaching and project experience. Previously a folk tutor for the Centre of Young Musicians and Open Academy Fellow at the Royal Academy of Music in London, her work as a teacher and facilitator has seen Phoebe involved in projects throughout the UK and as far afield as Sao Paulo and Mumbai, working with organisations such as EFDSS, The Wigmore Hall, The English Touring Opera, Spitalfields Music, Guri, and Songbound.

Phoebe currently gives private tuition in and around Oswestry and is a strings tutor for the Halton and Warrington Music Support Service and Love Music Trust. She is a fully affiliated member of the Incorporated Society of Musicians (ISM) and Musician’s Union (MU).