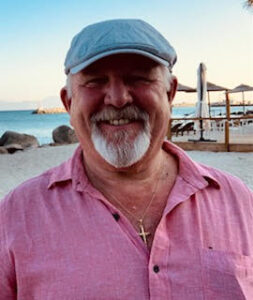 Keri spent many years on stage with the Swansea Welsh Drama Company, is a past member of the Mynydd Mawr Male Voice Choir and founder member of Cantorion y Rhyd Welsh mixed choir. He has also competed as a soloist in local eisteddfodau, but is probably better known as the founder member singer and guitarist with the popular Welsh folk/twmpath band, Jac y Do.

He has written and composed many tunes and songs for that band and for others, but he also enjoys spending his leisure time whittling walking sticks, writing strict verse and open verse poetry and playing his guitar. He’s also been a member of the chaired bard Robat Powell’s ‘cynghanedd’ (strict verse) class for a decade and is a keen and productive member of the ‘Tanau Tawe’ team of ‘Talwrn’ bards. Keri is most comfortable on stage singing traditional and ‘modern traditional’ folk songs and playing his guitar with members of his band, playing traditional folk tunes. He is very much the product of his upbringing, being steeped in his folk roots and the Welsh tradition. A man who revels in, “y pethe,” proud of his roots and traditions.